Your generostiy helps keep Fairlawn Cemetery in beautiful condition for the stories it holds. 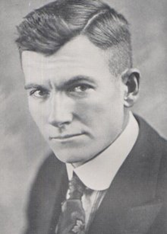 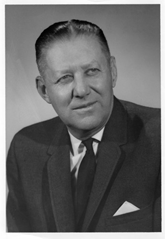 Henry Iba (b. 6 Aug 1904 - d. 15 Jan 1993) was Head basketball Coach of OSU for 36 years, 1934-1970. His teams won 2 NCAA Men’s Division Championships, making Iba the only coach in history to win 2 gold medals or to coach 3 Olympic teams. He was inducted into the Oklahoma Hall of Fame in 1965. And of course, these exceptional individuals are the namesakes of OSU’s Gallagher-Iba Arena. 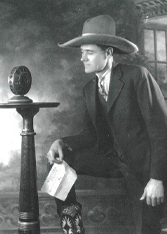 ● Dr. Rev. Davis served as minister of the First Presbyterian Church of Stillwater 1919-1942.

■ Bob Fenimore (b. 6 Oct 1925 - d. 28 July 2010) Known as the “Blonde Bomber”, Fenimore was the half back for Oklahoma A&M 1943-1946. He was Oklahoma A&M’s first two-time All American, and he played both offense and defense. In 1945, he led the Aggies to the National Championship and had a perfect, undefeated season. He was drafted by the Chicago Bears, and was the top draft pick in 1947 for the NFL. Fenimore was inducted into the National College Football Hall of Fame in 1972, as well as the Helms Football Hall of Fame, the Oklahoma Sports Hall of Fame, the Cotton Bowl Hall of Fame, the OSU College of Education Hall of Honor, the OSU Track Hall of Honor, the OSU Distinguished Alumni Award, the OSU Track Hall of Honor and the OSU Foundation Board of Governors.

■ William Wiley Abercrombie (b. 16 April 1846 - d. 1 March 1908.) In 1981, Abercrombie moved to Stillwater, which at that time was a small village. He and his family (who consisted of 11 children) were among the first settlers of Stillwater. He served as mayor of Stillwater in 1902. Abercrombie established Stillwater’s first electric power plant in 1896, and later turned the electrical system over to the City of Stillwater. He and his son-in-law, Pete Miller, established the Abercrombie and Miller cotton gin in 1896, as well as a meat market, grocery store and several other buildings. In 1891, he built the oldest masonry house in the territory, which still stands (now a local business) on 623 S Lewis St.